The world is changing, and it is our mission to direct that change. - Agent Asheville 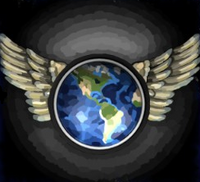 The Global Environmental Organisation (often referred to by the acronym "GEO") is a worldwide governmental and environmental agency tasked with tackling the problems of Humanity's future. The GEO was founded at the 2020 Climate Summit, after a catastrophic decade of natural disasters and human tragedies spurred the governments of man to take action and create a truly global, autonomous force to stand against the collapse of modern civilization. The person that has been chosen to lead the world is the player (known as the President of GEO in game), who essentially controls all GEO decisions.

GEO is funded by money from all supporting world regions. The amount of money GEO receives from a region is based on the region's GDP.

GEO uses this money to hire agents to send around the world and funding various policies, offices, and activities.

While regional governments still exist, the GEO holds ultimate power in Fate of the World. GEO has the authority to create, veto, or override any government policy to suit its agenda.

Reactions to GEO start out very mixed, with an even number of both skeptics and hopefuls around the globe. As time goes on, how the people of the world perceive the GEO is up to the player and their actions. As GEO's reputation falls in a region, the people (and eventually regional governments) will begin to react negatively towards the organisation, starting with peaceful protests but eventually flaring into rioting, attacks on GEO personnel and buildings, and full-scale clashes between anti-GEO factions and the police. If support falls too low, regional governments might reject the organisation completely, freezing their part of the funding as well as ejecting all GEO agents from the area. This ban lasts a period of years (usually roughly two decades), after which regional attitudes will have improved enough to rejoin GEO and admit its agents back into their territories. However, if enough regions reject GEO at once, it can no longer function as a global agency and the game will end in failure, causing the GEO to disband, and leaving the nations of the Earth to fight the tides of discord alone.