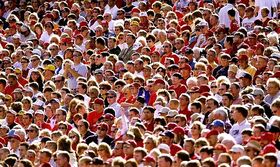 "Population" refers to the number of humans within a region, as well as the Earth as a whole. Every world region starts with a different population. Both over- and under-population can cause problems. While large-scale changes to a Region's population size are difficult to control, cards such as One Child Policy and Baby Boom can shift the curve up or down (in extreme cases using Sterilization or Plagues).

Many developing regions can become vastly overpopulated, easily having over a billion people living in them.

Most developed regions, especially Japan and Australia, face the opposite situation; they have a small (and steadily shrinking) population and high HDIs caused by commerce-focused economies with comparatively few people to spread the wealth around to. Smaller populations mean that these regions are easier to keep secure and tend to be less polluting because of their reduced energy needs.

The biggest problem with small populations is their vulnerability to disasters.

Another issue is that, due to the low number of people, it's often more efficient to focus GEO's efforts in more populated areas first. After all, it costs exactly the same to commit China to renewable energy as it does Japan, but the project would have over 10 times as much effect in China, due to the number of people affected. This doesn't seem like much of a concern (and, indeed, might help players decide where to begin their work), but it often means GEO will neglect the regions until it's too late to save it.