This page could use more information. Help us complete this FOTW wiki article on the Major Tipping Points in the game.

The Greenland ice sheet is surprisingly vulnerable for something seven times the size of the United Kingdom. Dangerously high temperatures can cause a runaway effect and irrevocably destroy the entire sheet. Fortunately the collapse will take several hundred years, so in effect it boosts the rise of sea levels and ruins your image.

It is possible to doom the Antarctic ice sheet, but achieving that may be less of a disaster and more of an accomplishment.

As the global temperature increases, methane (a greenhouse gas) will be released from the arctic, further accelerating global warming. The most severe of these releases occurs when the temperature reaches 3 degrees above pre-industrial levels. Once this happens, it is almost impossible to reverse the warming of the planet. 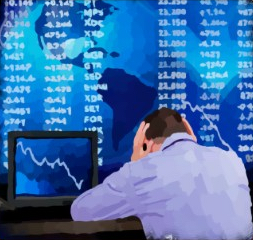 A common cause of financial crises are resource shortages. All work sectors require energy, transportation, and water, but the agricultural and industrial sectors require raw materials. A fossil fuel shortage (especially oil and gas, which is used by both sectors) leads to a decline in agricultural and industrial production, a boost in commercial activity as workers turn to less resource-demanding jobs, and eventually a financial crisis.

Financial crises can be countered by applying Tobin Taxes, growing agricultural and industrial sectors, and ensuring that both sectors have enough oil, gas, and coal to work efficiently. Once Artificial Intelligence has been discovered, funding a Market AI in highly commercial regions can help prevent the onset of financial crises.

Famines are caused by a region's local food supply dropping below $350/capita. There are two types of famine.

There also exists extreme versions of both types of famine, where food supplies drop below $175/capita.

While political famines can be prevented or ended by increasing stability and starting a 'Famine Relief Programme' in the region, genuine famines are global issues. The only way to deal with such a famine is to increase global food supplies. Grow agricultural sectors around the world and make sure regions have enough energy, transportation, oil, natural gas, and water to meet their agricultural demands.

Other useful strategies are to research improved biofuels that have smaller impacts on food supplies, Protect Land, Water, and Soil Resources, and use High-Yield Crops, Genetically Modified Food, Conventional Farming, and Subsidized Biochar.