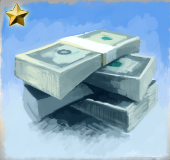 A Tobin tax is a low tax levied on all exchanges of one currency to another. This tax is low enough not to inconvenience most people but high enough to discourage short-term speculation ("buying" foreign currencies in the hopes of "selling" them when they become more valuable than the domestic currency that was used to buy them with). The reduced speculation would lower the volatility of exchange-rates, effectively helping prevent or calm financial crises.

Because countries acting alone would have problems issuing a Tobin tax (since speculators would simply need to leave the country to avoid the tax), many argue that the tax would be handled best by an an international institution such as the United Nations. Or GEO.

You can issue a Tobin tax as a Project card in any stable region with more than 0.90 HDI. As long as an agent is focused on the project, you earn an additional $100 in income every turn. However, the tax will lower your support in a region and make the commerce sector grow slower.